A tribute to the late Shri Gurunath Vaikunth Shetye 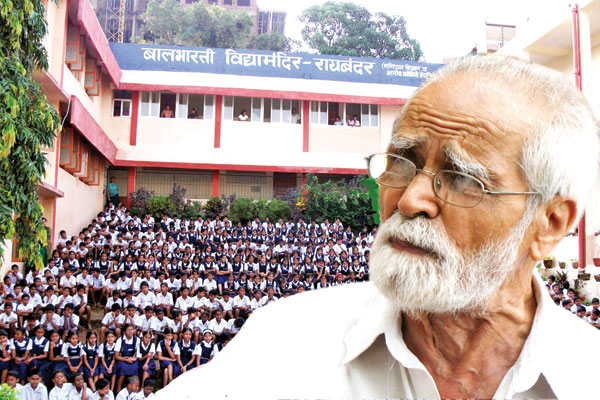 March 31, 2019, marks the first birth Anniversary after the demise of late Gurunath Vaikunth Shetye. On this occasion, P.R.NADKARNI pays homage to one of Goa’s leading figures and the founder of Bal Bharati Vidyamandir, Ribandar-Goa; on behalf of his family, relatives, students and well-wishers of late Shetye

On the hill top plateau of the Ribandar, there is a big educational complex of Bal Bharati Vidyamandir overlooking Panjm, the Mandovi River and the surrounding beautiful panoramic scenery. Upto recently, this was the only two-storey building on the hilltop, but since last decade several multi-storey buildings have come up in the vicinity of the school. Bal Bharati Vidyamandir, located in Ribandar, is the dream child of its founder, late Shri Gurunath Vaikunth Shetye of Ribandar-Goa.

Shetye, born on 31st March, 1923 started his early education in the school established by his father at home itself, as was the practice in many villages in Goa during those times. Thereafter, Shetye had to move to several other places like Vengurla, Ichalkaranji, Kolhapur, Mumbai, Pune, etc. He had to face several hardships since he was away from his parents. While studying at Ichalkaranji and Kolapur he was fortunate enough to build up his body through the local traditional exercises in “Kusti” and “Mallakhamb”.

While in Kolhapur and in Mumbai, he came in close contact with the stalwarts in the Indian freedom movement like Comrade Shripad Amrut Dange, S.M. Joshi, Shirubhai Limaye, etc. and so also with the stalwart of the Goan Liberation movement Shri. Vishwanath S. Lawande. In 1942, while he was studying in Kolhapur, he participated in the agitation of the Quit India Movement and for which he was arrested and was imprisoned for four months. Thus, Shetye may be one amongst a very few Goans who gave their contribution in the freedom movement of India as well as Goa Liberation. In spite of this, Shetye neither made any efforts to register him as the freedom fighter nor was interested in getting the pension for the freedom fighter. While he was in Mumbai, he even worked as an assistant to Comrade Shripad Amrut Dange. Thus, Shetye imbibed the spirit of patriotism and social work at an early age and was very much influenced by communist ideology.

After the completion of his graduation, he returned to Goa. Late Shri M.F. Surlakar, the founder Principal of People’s High School, Panjim invited him to join as a teacher in his school. Thus, Shetye proudly expressed his indebtedness to Shri Surlakar and always mentioned about his encouraging words. Since Shetye had made up of his mind to accept teaching as his profession, he went to Pune and completed his B.Ed.

After liberation of Goa in 1961, Shetye decided to establish his own school at Ribandar-Goa and thus Bal Bharati Vidyamandir came into existence on 18th June, 1962. Initially, the school commenced in private houses at Chimbel and then was shifted to Fondvem-Ribandar. For the construction of the existing School building, Shetye donated his prime land admeasuring 2250 sq. mt. for which he expressed his gratitude to his father for giving him his share of property which he could utilize it for the school. The first phase of the building was completed in 1975 and subsequently the second phase in 1985 and the third phase in 1995. Shetye had to pay the loan installments from his own salary and at one time had to mortgage even the gold ornaments of his wife. Thus, Shetye was given full co-operation by his wife Mrs. Sharada Shetye who became the Headmistress of the school after his retirement and she was awarded the National Award for her meritorious services.

Due to the hard work and dedication of the staff, Bal Bharati Vidyamandir established its own credential and reputation in the academic, sports as well as other co-curricular activities. Shetye was little bit worried about the future of the school because of his ageing and wanted to handover the school to professionally managed educational body and he approached late Shri T. Ramesh U Pai, the Architect of the modern Manipal who assured him all the help and support and in 1998, the school was ceremoniously handed over to the Manipal Academy of Health & Education (MAHE) and his decision proved to be extremely wise since over the years the MAHE has invested around Rs one crore for the construction of the independent buildings for Pre-primary School, Primary School, Independent hall, Audio-Visual Room, Resource Room, development of Playground for which Shetye made available his additional piece of prime land around 7,000.00 sq mts at a very reasonable amount to MAHE. The Bal Bhavan, Goa has also established its centre in the school which provides opportunities for the students to learn art, craft, music, drawing, painting, theater art, classical dances, clay modeling, etc.

Shetye always remembered the co-operation extended to him by all the trustees and Shri Shrikant Kamat in particular and so also the support of his wife, the family members, and the staff of the school, Shri Shripad Yesso Naik, the (former North Goa) MP for his support under MPLAD Scheme.

Shetye, even at the age of 93 or so visited the school almost every day. He was honored by several organizations for his selfless contribution to education and more particularly with Dr. Atmaram Mayekar Award and the “Jeevan Gaurav Puraskar” by Shree Shantadurga Shikshan Samiti, Kawale-Ponda, Goa as a part of its Golden Jubilee Celebration. For his outstanding contribution to this Institute one of the past students Shri. Sunil G. Morajakar has brought Shetye’s idea of a Garden School concept by constructing a Garden School with all the facilities in the name of Smt. Sharada Shetye. This silent worker in the field of education left for his heavenly abode peacefully in the early hours of September 29, 2018 at his residence at Jairam Complex, Neugi Nagar, Mala-Panjim. He is survived by large Shetye family of Ribandar and more particularly by his two daughters, namely Dr. Sushama Avadhut Sinai Bhonsule,Professor , Goa Medical College, son-in-law and their children and Shubhada Shetye, Civil Engineer.

Today on this day of his first birth Anniversary after his demise, I pay homage on behalf of his family, relatives, the several students and well-wishers of late Shetye and pray that his soul may rest in eternal peace.