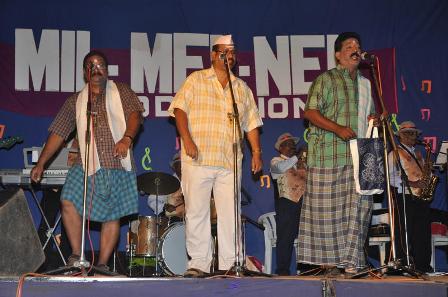 Mil-Mel-Nel, the veteran trio in Goan musical entertainment industry enthralled the audiences with their Silver Jubilee Konkani Musical Show, Adim ani Atam at Ribandar on January 27, 2011 under the banner of Mil-Mel-Nel Production. The short and sweet rib-tickling comedy parts by Ben Evangelisto and Joana brought noise of laughter from the crowds. Agnel de Borim played a perfect host with efficient compering efforts. The cream of the cake and a real delight was to see our very own, Elina Rodrigues performing on-stage in Ribandar after many years.

Mil-Mel-Nel’s Adim ani Atam will be remembered as a great effort by the veteran music trio for long times to come. Musical scores for the evening were provided by Agnelo Dias & Luis Cotta.

… Report filed with inputs by our Ribandar correspondents, Babin Naik and photography by Mr. Prakash Naik.