A feast in gratitude to Our Lady of Help 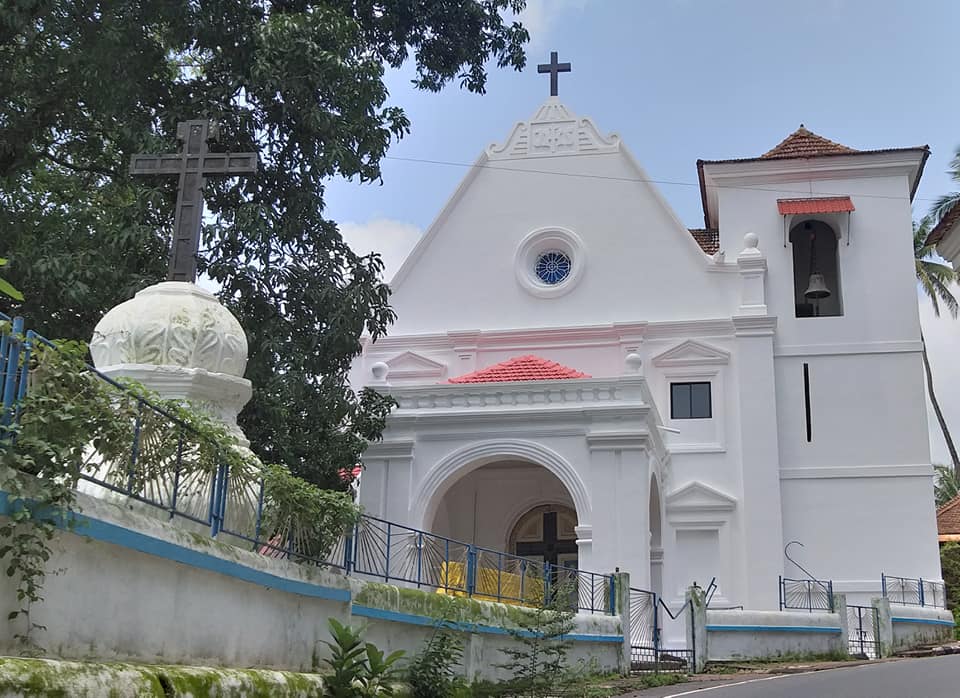 November 9 marks the Feast of Nossa Senhora de Ajuda (Our Lady of Help), Ribandar. Maria de Lourdes Bravo da Costa Rodrigues traces the legends behind the church and its feast for NT BUZZ On the Ribandar – Old Goa road, opposite the Chorao ferry wharf, between two roads, is perched the beautiful church of Nossa Senhora de Ajuda (Our Lady of Help). An interesting legend surrounds the Ajuda Church, which was originally a chapel dedicated to Our Lady of Immaculate Conception, under the ecclesiastical jurisdiction of the Church of Our Lady of Livra Febres in Chimbel. What might have been the legend that was so important as to have a new church built for devotees of the locality?

THE LEGEND
It is said that a Portuguese ship was found in dire straits at sea due to a storm. The ship was badly damaged and in danger of sinking along with the crew. That is when the captain and the crew prayed to Our Lady for protection and help. Then, they saw a vision of Our Lady in the sky and heard a voice urging them to go to the river banks and walk (arribar e andar). Our Lady helped them reach near the chapel and move to safety. The sailors who salvaged the wreck rushed to the chapel to thank and pray to Our Lady of Immaculate Conception and vowed to build a church in her honour. The size of the ship is indicated by two crosses erected on the margin at a distance of 102 meters from each other. The church is said to be of the dimensions of the ship.

HISTORY OF THE CHURCH
Different dates are given regarding the erection of the church. Jose Nicolau da Fonseca in ‘Sketch of the City of Goa’ mentions that it was built in 1565 whereas from the title of book ‘Titulo de todas as despesas ordinarias que se fazem na Cidade de Goa a custa de Fazenda de S.A., ano 1575-1576’ we that the date of construction of the church is affixed at ten year after the aforementioned date. Gomes Catao writes in the Anuario that the church was built in 1656, while the well known Jesuit scholar Fr G Schurhammer, SJ says that the Ribandar church was built before 1539.
In 1554, when the body of St Francis Xavier arrived from Malacca it was kept in the church due to pending finalisation of arrangements for the reception of the body at the City of Goa.

THE ARCHITECTURE
The church is an architectural example of early Mannerist Neo-Roman style and has four bays and three storeys. The façade is a peaked gable and has an oculus in the centre. At the apex, is a cross below which, on the wall, is inscribed ‘IHS’. It has a large three storey bell tower to the right. There is a porch in front of the church, with arches and ball finials. In front of the church, there is a big cross that once belonged to the Chorao Seminary.

THE FEAST
In the past, on the feast day, sailors of the Portuguese Navy in India dressed in their uniforms used to carry the ship in the procession. Later, boys dressed as sailors participated in the procession and carried the miniature ship, which was fitted with all the accessories of an authentic ship. Today the tradition of dressing up in uniform is not followed. However, the ship is carried during the procession. The miniature ship is very old. It has an image of Our Lady on board and has wheels at the bottom to facilitate carrying it during procession.

THE CHURCH TODAY
Since the church is under renovation, it was not possible to see the present condition of the altars and interiors of the ship and the present description is based on the documents available, especially from an article by Ricardo Micael Telles in ‘A Voz de S Francisco Xavier’, ‘Anuario da Arquidiocese de Goa e Damao’ and ‘Tiswadicho Igorjeo’ by Fr Moreno de Sousa.

Above the arch of the main altar is a painting of a ship with Our Lady depicted on it. A similar fresco is found on the exterior wall, on the side of the river. The false ceiling had panels depicting episodes from the Old Testament. Legends say that the false ceiling was built from the wood of the wrecked ship. The hewn beams that once supported these panels today lie in the corridor of the church and cemetery. The panels were beautiful encircled as they were by lace woodwork. They were the work of an Italian artist. These panels were lost in 1900 when the repair work of the church was undertaken.

Collateral altars are dedicated to Our Lady of Monte and Jesus Crucified. Above the former there is an image of St Miguel with Our Lady of Prazeres and Saint Joseph on the side, which belonged to the extinct church of Saint Thomas. Below is statue of Saint Francis Xavier.

Above the second altar is the statue of Jesus Resurrected (Senhor Ressussitado) and below is the statue of Menino Jesus. Saint Sebastian and Our Lady of Assumption are on the side. In the sarcophagus is the image of Jesus (Senhor Morto). The pulpit has a niche with the image of Our Lady of Immaculate Conception, which belonged to the ancient chapel. In the body of the church is the altar, which according to Telles, was from the Inquisition. The altar has a big crucifix, images of Our Lady, Saint John and Saint Maria Maddalena. The altar before being installed in the church was kept in the arsenal.

On the other side is the altar of Sacred Heart of Jesus.