The Two Sides of Semanca Rebelo 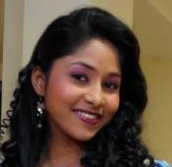 Brimming with self-confidence and passion and just three tiatrs old, 21-year-old Semenca Rebelo from Ribandar is the cynosure of all eyes

By day she is a kindhearted, caring and compassionate teacher to little children at the ‘Kids Kingdom International School’ in Porvorim, by night, the evil, jealous and scheming elder sister in Prince Jacob’s latest tiatr, ‘Pap Tujem Pirachit Mhojem’. Meet 21-year-old Semenca Rebelo from Ribandar, one of the many new entrants on the professional tiatr stage. “I love tiatr and I love acting. In such a short span, it has given me so much fame and recognition. People know me today because I am a tiatrist,” Rebelo, who is just three tiatrs old, says, brimming with joy.

An arts graduate having majored in philosophy, Rebelo first stepped onto the tiatr stage in 2009 in Danny de Ribandar’s tiatr ‘Dekh’ where she played the main lead. Tiatrist Mathew Araujo who observed her acting, then offered her a role in Ignatius de Xelvon’s tiatr ‘Pavsacher Patieun Bebuk Roddlem’ which went on to complete 15 shows one after the other and Ami vo Tumi by Mini Mario.

On the prestigoues Kala Academy Tiatr Competition she first acted in Thank You Doctor by Salvador Fernandes in 2011. Last year she sang one song in Agnelo lobo’s Visvas Dovorcho Konnacher and won the second place in the Female Category. Rebelo has also won the first place best Singer female category in Comedian’64’s Tiatr “Thikann”.

With encouragement from her parents and especially her father, Francisco Rebelo (Remed), an amateur tiatrist, Rebelo continued her foray in tiatr at the annual Kala Academy tiatr festivals. It was Jr Reagan who noticed her talents here and recommended her to Prince Jacob, where Rebelo soon began making a name for herself beginning with Prince Jacob’s ‘Dusmanak Pasun Nirminaka’ in 2012, Amchea Gharant Tiatr, Hi Kanni Tum Sompoi followed by ‘Pap Tujem Pirachit Mhojem’ in 2013, where she plays the role of ‘Simran’, a jealous elder sister, unhappy with the attention her younger autistic sister gets from their parents.

In real life too, Rebelo does not feel as if she is getting the attention she deserves. “Yes, I do feel that I do not get audience appreciation because I play heartless negative roles. In the green room too, some people, while interacting with my co-artistes, just stare at me blankly without any reaction. Once at a show in Verna, on seeing my negative portrayal on stage in the tiatr ‘Dusmanak Pasun Nirminaka’ one man screamed loudly from the audience, ‘Puro…chol voch ata’ (enough, now go away),” Rebelo states, not knowing that it is her acting ability alone that makes the negative portrayals so believable and so real that the audience reacts with spite.

Thankful to her parents for their encouragement and grateful to her seniors Annie Quadros and Diana for their constant guidance and support, Rebelo feels lucky to be a part of Prince Jacob’s troupe, and says, “Prince Jacob has guided me very well; he knows how to get the best from his artistes. I would love to continue on the tiatr stage for as long as I can. I am proud of my culture and Konkani.”

The Rebelo we see today is indeed far different from the one we saw in ‘Dusmanak Pasun Nirminaka’ and radiates confidence and maturity in both her acting and her singing. For the moment, however, she should concentrate on her acting ability and keep doing what she does best.