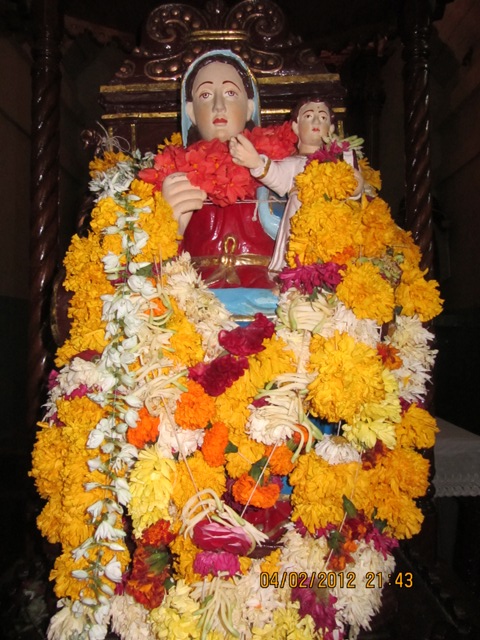 The feast of OUR LADY OF REMEDIOS was celebrated with gaiety and pomp in the Patto Waddo of Ribandar village on the 4th of February 2012. The feast is usually celebrated on the first Sunday (now Saturday) after the feast of Presentation of the Lord Jesus at the temple.

The main theme of the feast and novenas was “Maria Devak Amchem Jivit Orpunk Prernna “. The novena spanned the life of Mary in different roles and her total surrender to fulfil God’s plan for the salvation of His people.

The main celebrant for the Feast was Fr. Kelvin from Old Goa who continuously stressed the deep faith Mary had in God and she, as the mother of Jesus and our Mother, has been the right inspiration for our religious life.

In his sermon, Fr. Kelvin delved into the Biblical times when the strict laws forbade many things. He cited the quotes from ‘ A book of Daniel’ about how allegations were levelled against Susanna and how severe the punishment could be for women caught in adultery. The Lord came to her rescue and the truth surfaced when the two men were exposed and confessed to their evil plans.

He drew similarities in the Life of Mother Mary when the Angel conveyed God’s message to her and even after knowing the laws and the society norms, she offered herself to the will of God to be the Mother of His beloved son, Jesus.

Fr. Kelvin stated that it is due to lack of proper Bible knowledge, the laity gets confused and easily influenced by the forces driving the faithful away from the church. He chose the scripture when the people come to Jesus to inform Him that His Mother had come to see him, he responded as ‘who is my mother? The one who abides by the Word of God is my mother”

It is a wrong notion carried by many that Jesus did not accept Mother Mary’s holiness. Therefore, Fr. Kelvin clarified that Jesus was actually giving the example of Mary by telling the people of those times that she is His mother as she has been abiding by the word of His Father. And, that they too could be his mother, if they led their life by totally surrendering to the will of His Father.

The message to the faithful was to make Bible reading a ritual to understand God’s word. Our Saviour Lord Jesus has given us a Mother, whose intervention is very important in our daily life.

Later in the evening, the Patto Waddo put up a family drama presentation, KONN ZABABDARI, written and directed by young Brian Fernandes with a galaxy of talented artistes.