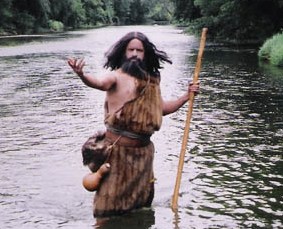 San Joao festival kicked off with much merriment and fun at Ribandar with many locals partaking in the annual celebration of jumping into wells symbolizing the “leap of joy” Elizabeth experienced at the greeting of Mary when she visited her.

“And it came to pass, when Elizabeth heard the greeting of Mary that the babe in her womb leapt. And Elizabeth was filled with the Holy Spirit and cried out with a loud voice, saying: ‘Blessed art thou among women and blessed is the fruit of thy womb! And how have I deserved that the mother of my Lord should come to me? For behold, the moment the sound of thy greeting came to my ears, the babe in my womb leapt for joy. . . .'”

St. John the Baptist has a birthday on June 24: one of the oldest feasts in the liturgy and, aside from the birthdays of Our Lord and His Mother — and Pentecost, if you will, the only saint’s birthday to be celebrated. All the others were born with original sin on their souls; so the day of their death, or their particular heroism, or the founding of their Order, is celebrated. How St. John came to be born without original sin on his soul is a story almost everyone knows, but fewer realize that there is mention of him seven centuries before in the prophecy of Isaias. Isaias’ words are so prominent in the Advent liturgy, foretelling the coming of Christ. His words are also used in all four Gospels to describe St. John the Baptist; in fact, St. John says them about himself: “The voice of one crying in the wilderness, make ready the way of the Lord” (40:3).

Sao Joao festival is celebrated amongst the Catholic Community every year on 24th of June with its dedication to St. John the Baptist with much merriment and fun activities at village levels especially in the water bodies. The highlight of the festival includes young crowds drinking alcohol and taking a leap of joy into the wells, ponds or rivulets wells yelling “Viva Sao Joao”.

As the tradition goes, on Sao Joao festival expecting mothers offer fruits, flowers and vegetables into the wells or ponds, praying for fertile and bountiful womb. Also girls’ hoping for a match also offers fruits and other things to the pond. This is a family gets together for a celebration.

Another custom until now ritually followed in most of the villages include village youth visiting the houses of newly-wedded couples for a potful of local brew – “cashew feni”. Also the in-laws take pride in inviting their son-in-laws to visit their homes for a feast followed by a procession with colorful flower wreaths on their foreheads and flower garlands in their neck to the village well for a dip in cool refreshing waters. The procession is led by local youth singing mandos and dulpods to the beat of ghumotts and tambourines. The son-in-laws return home with loads full of variety of fruits as a gift from the in-laws.

Some of the dishes prepared at Sao Joao feast is ‘patolleo”, cooked from stuffing of grated coconut, rice, jaggery, raisins and many other things trapped in turmeric leaves. As a tradition, Raibondkars prepare patolleo on the 15th August commemorating the feast of our Lady’s ascension into heaven. Other traditional meals at San Joao comprise lot of vegetable preparations, salt-water mango, salt fish, the hard round bangle-like bread ‘kankonn’ dipped in a concoction of moog dal. Several programs are organized

Sao Joao (John the Baptist) was the son of Zachary, a priest of the Temple in Jerusalem, and Elizabeth, a kinswoman of Mary who visited her. He was probably born at Ain-Karim southwest of Jerusalem after the Angel Gabriel had told Zachary that his wife would bear a child even though she was an old woman. He lived as a hermit in the desert of Judea until about A.D. 27. When he was thirty, he began to preach on the banks of the Jordan against the evils of the times and called men to penance and baptism “for the Kingdom of Heaven is close at hand”. He attracted large crowds, and when Christ came to him, John recognized Him as the Messiah and baptized Him, saying, “It is I who need baptism from You”. When Christ left to preach in Galilee, John continued preaching in the Jordan valley. Fearful of his great power with the people, Herod Antipas, Tetrarch of Perea and Galilee, had him arrested and imprisoned at Machaerus Fortress on the Dead Sea when John denounced his adultrous and incestuous marriage with Herodias, wife of his half brother Philip. John was beheaded at the request of Salome, daughter of Herodias, who asked for his head at the instigation of her mother. John inspired many of his followers to follow Christ when he designated Him “the Lamb of God,” among them Andrew and John, who came to know Christ through John’s preaching. John is presented in the New Testament as the last of the Old Testament prophets and the precursor of the Messiah. His feast day is June 24th and the feast for his beheading is August 29th.